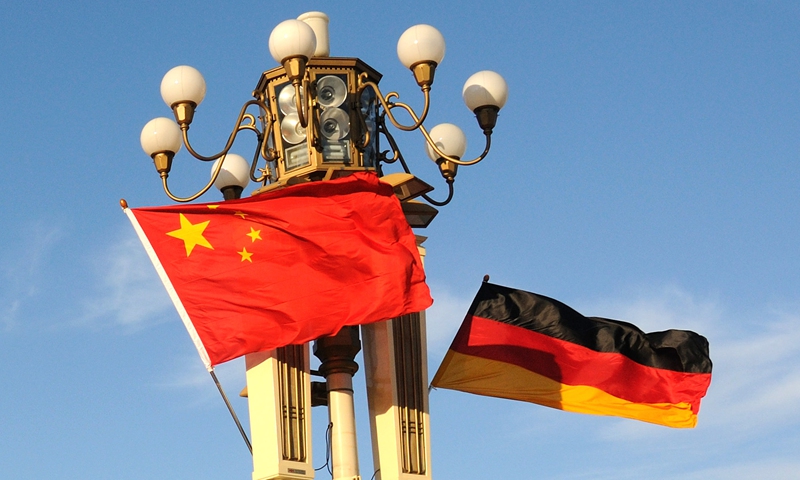 The German federal election is still eight months away. Some in the German political realm have begun to ponder the China policy of the post-Merkel era. But before we grasp an idea of what this entails, we'd better re-examine the China-Germany trajectory under Chancellor Angela Merkel.
In her almost 16-year tenure as Germany's chancellor, Merkel has attached great importance to China-Germany ties. She ensures that the comprehensive strategic partnership between China and Germany, as well as the China-Europe relationship, proceeds steadily. During her initial years, Merkel spoke a lot about values, which brought a few twists and turns to China-Germany ties. But soon she adjusted her China policy and pursued pragmatic strategies. She visited China 12 times, paving the way for multifaceted and high-level cooperation between the two sides.
In many respects, China-Germany relations help determine overall relations between China and Europe. One pillar of Europe's China strategy is to prompt political reforms in China by deepening economic engagements. Merkel's China policy adheres, but is not limited, to this logic. The China-Germany comprehensive strategic partnership not only includes economic cooperation, but also consultation and dialogues at the government level. Both are the driving forces for globalization and global governance and maintain strategic communication in major international and regional issues.
However, there are differing voices within Germany. Some German media and people do not have a comprehensive view of China and keep on high alert against China. Even some Germans and Europeans believe the recently struck deal - the China-EU bilateral investment treaty (BIT) - is a gift Germany presented to China and something in which only China wins. Of course, they fail to understand that cooperation will enable Europe pick up its declining economic influence in the world.
With this mind-set being exacerbated in Germany and Europe, uncertainties remain in the post-Merkel era. Strategic retraction is anticipated. On the one hand, the new leadership has to figure out the internal politics of the Christian Democratic Union (CDU) and the CDU's relations with its ruling partners. On the other, Germany lacks another Merkel-like leader that insists on independent policies based on Germany's interests.
Changes in leadership are bound to bring alterations in diplomatic ideas and practices - especially against the backdrop of US president-elect Joe Biden's repeated calls for the amendment of transatlantic ties. With this we can anticipate that Germany will coordinate with the US regarding China policies.
But it is unlikely that Germany's foreign policy will decouple from commercial interests. For one, one of Merkel's political legacies is the completion of the China-EU BIT. In spite of uncertainties, the road map for bilateral economic and trade cooperation has been set up. For another reason, China and Germany have been highly interdependent in terms of economy and trade. Although the COVID-19 pandemic has dealt a heavy blow to the industrial chain, it is almost impossible for Germany to bring back industries in a short period of time; even at high costs.
In recent years, Merkel and her colleagues have been eyeing to raise the influence and strategic autonomy of Germany and Europe. They do so in order for Germany and Europe to hold power with initiatives in the triangular interactions with China and the US. Her efforts are bearing fruit. A more capable and independent Europe can engage in more meaningful cooperation with the US. It can also have a greater say in China-related matters.
As the new US administration gets primed to take power, Germany believes that Europe needs to maintain long-term transatlantic partnerships. Divisions within the US and structural conflicts between the US and Europe (plus divergences within Europe) will all affect the coordination between Europe and the US regarding China policies.
The author is a research fellow with the Institute of European Studies, Chinese Academy of Social Sciences. opinion@globaltimes.com.cn
文章原址链接：http://enapp.globaltimes.cn/#/article/1212228
版权所有：中国社会科学院欧洲研究所   转载敬请注明：转载自 中国社会科学院欧洲所网站： http://ies.cass.cn/ 地址：北京市东城区建国门内大街5号 邮编：100732 电话：(010)85195736 传真：(010)65125818 E-mail：gongzuo@cass.org.cn